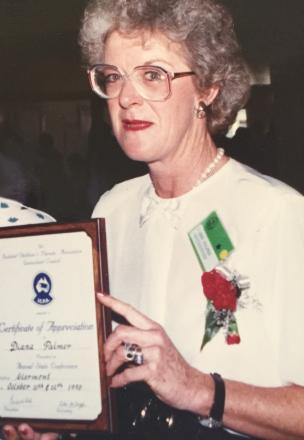 Diana was an inaugural member of the Cunnamulla Branch and was elected Secretary in 1974, a position she maintained for the following four years.  Diana was a committee member from 1979 - 1982 when she was elected Branch President.

Diana was elected to Qld State Council in Longreach in 1977.  She served as a Committee member and was the Lone Member Officer until 1981 when she stepped into the role of State Treasurer.  In 1984 Diana retired, however in 1985 she was elected as Executive Officer, which involved handling all the publicity for ICPA Qld.  Diana's photographic eye, enthusiasm and creative flair saw her establish strong links with the media.  She encouraged the establishment of the Qld Council Newsletter which was first printed in 1986, and after two printings, became 'News and Views'.  Diana retired from State Council in Roma in 1988.

Diana was awarded a Qld Certificate of Appreciation in 1990.