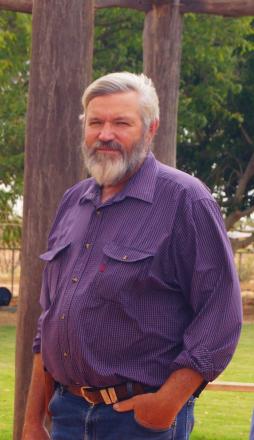 Andrew has a long association with ICPA stretching back to the nineties. The very first Queensland Conference Andrew attended was at the RSL Club in Mt Isa in 1993. During this time Andrew was playing a support role to Mary as chief baby sitter of their youngest child Andi-Claire. They attended a number of Qld and Federal Conferences in this manner.

It was at the Charleville Federal Conference in 2002 that Andy took the leap of faith and joined Federal Council. Andrew remained on Federal Council for seven years, and was Vice President for the last four. Andrew stood down at the Longreach Federal Conference in 2009. That same year, Qld President Lorraine McGinnes asked Andrew to come onto Qld State Council at Winton, so he was “off council” for about six weeks and then back on again. Andrew took over from Lorraine as Qld President at the Rockhampton State Conference in 2011 after serving as Vice-President for the duration.  Having served for four years Andrew retired as president in 2015 at the Cloncurry conference, followed by two years as Immediate Past President bringing the end of his direct involvement with State Council in 2017.  However, with some unfinished business left in the communications portfolio Andrew stayed on in an 'off-council' role as the USO advisor for a further two years.

Andy gave his all to ICPA. When business responsibilities and running a cattle property in drought could have easily consumed his focus, he never let these pressures overshadow the commitment he gave to his team and the effort he put into members' issues.

For a number of years Andy led the Communications portfolio. As the issues of access to reasonable internet connections for our rural and remote members continued to accelerate, Andy did a magnificent job keeping abreast of this extremely complex portfolio. His endeavour to get the message through to government that rural and remote Queensland could not and should not be left with a sub-standard service that our mainstream counterparts would never accept were unfailing. The relationships Andrew fostered with the Qld Department of Education IT department and Federal Communications departments enabled ICPA to have a real voice and a seat on the table at these discussions.

Mention must also be made of Andrew's building a wonderfully favourable relationship with the Department of Education, in particular Patrea Walton, DDG State Schools at the time. Our current State Councillors continue to benefit from this positive collaboration and will do all we can to continue this way.  Working with the department in a positive way and offering solutions to the problems has ultimately lead to many favourable outcomes for the members and we continue to thank Andrew for paving the way for us.