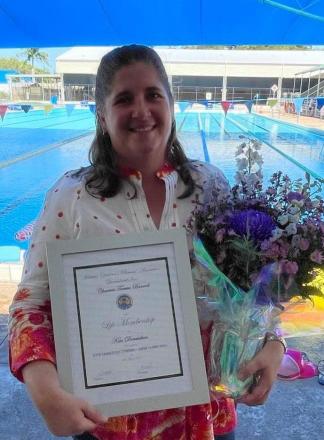 Over the years, Kim has remained an important member of the Charters Towers Branch taking on many executive positions including that of dual roles Secretary and Treasurer with a period having held the two positions in the same year of 2004.   Kim then accepted the role of Secretary until the year of 2008.  Kim always encouraged new families in the district to join the ICPA and was a wonderful leader in showing everyone the ropes.  There was never a question too hard for her.  She knew all the answers which made it all the easier.

Kim was always within earshot to put her hand up when there was a catering contract coming up for the branch.  It did not matter whether it was right near her at Greenvale or at Balfe’s Creek just west of Charters Towers.  Kim had so much to offer and was always an asset in the kitchen making her light and fluffy rice for that deadly curry for the camp draft.  The Charters Towers Branch held many a catering gig within the catchment and there was not too many that Kim could not attend.  Many hands make light work and plenty of laughs with Kim on board.

In 2007 Kim had a vision to set up what was to become the Charters Towers ICPA Sports Camp.  She persisted with this great task and to this day the camp continues to be a big part of the branch’s calendar.  There was always fundraising, grants and donations which Kim had many contacts, and I am sure they would not be game to knock her back.  She always had the kids at heart and made her point to get the most for the sponsors for the kids.  When everyone was fast asleep each night of camp, where was Kim?  She was always up until the wee hours of the morning fine tuning and still printing stuff out to start the morning off.  She sometimes had to shut her eyes while you were in mid conversation with her but totally understandable given the tireless hours she had put in overnight.

Kim has attended many, many State Conferences, a few as delegate for our branch and maybe one or two Federal Conferences.  In 2008, Kim did the branch proud and become a Qld State Councillor and then the following year took up the role of Assistance Secretary.  This is where she attended so many conferences and her knowledge just soared.  Kim knew the ins and outs of any allowances and assistance that we as rural and remote families were entitled to.   I am sure she did a wonderful job true Kim style, always with plenty of passion and dedication.  Kim held that role for 12 years and only just hung up her hat in 2020 at the Toowoomba Virtual Conference.

We as a branch can only wish Kim all the best for her future adventures, maybe a few grandchildren may be on the horizon down the track.  All her children have now grown up to be wonderful young adults soaring through their own world.