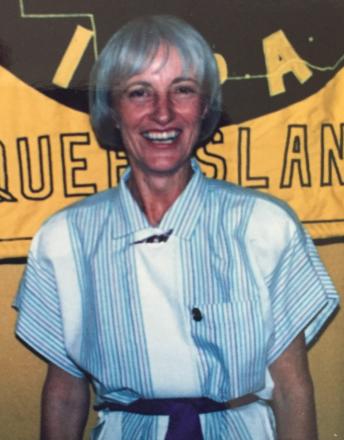 Jan was elected to State Council at Blackall State Conference in 1975.  Jan was twice elected Vice-President and served as Publicity Officer for 3 years.  During her nine years on Council, Jan was involved in a broad range of issues including particular involvement with the Isolated Children's Special Education Unit.  She devoted her efforts to the needs of correspondence children and in 1981 was instrumental in the introduction of Distance Education Seminars which spread to all education regions by 1982.  These Seminars, together with the presentation of a paper in 1983 to the National Workshop on Distance Education, led to far greater recognition of the role played by the Home Tutor.

Jan was an inaugural member of Blackall Branch and elected to the Committee in 1972.  She held positions of President, Vice-President, Secretary and Publicity Officer.

Jan was also elected to Federal Council in 1980 and was an involved member until her retirement in 1984.  Jan also took on the role of Pedals Editor from 1983 - 1985 sending seven editions of the magazine to press.

Jan was awarded a Qld Certificate of Appreciation in 1987.