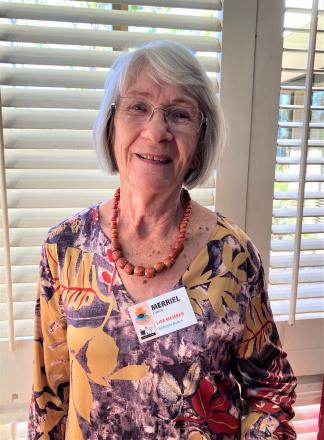 In the 1970's while living on a pastoral property and endeavouring to educate her three older children and foster daughter by distance education, as well as some fifteen to twenty other students, in a one teacher school, Merriel became acutely aware of the difficulties associated with providing quality education to children in the bush.

Merriel became a member of ICPA and has continued her association with this wonderful organisation until the present day. Her contact with Katherine Branch of ICPA was mostly through Katherine School of the Air radio and functions in town when roads were passable. Daly Waters campdraft and rodeo was always an important fundraising opportunity at which they catered for many years, along with various functions in Katherine including the local show.

As there were so many children on the property where she and her family lived, aged from four to fourteen, many of whom had never attended school, an application was made, and approved, to open a school on Hodgson River Station. Two "Silver Bullet" caravans, one being the teacher residence and the other the ablution block, arrived late in 1975 along with a few very rudimentary school supplies from a previously closed school. The wet season and boggy roads prevented the arrival of the school van.

Everyone was very eager to have the school operating so it was decided to convert the cattle crate on the station truck into a classroom as the truck could not be driven off the station during the wet anyway. The truck crate was removed and placed on fuel drums under a shady tree and a roof attached. Planks and logs provided seats and desks and the children's books, tiny blackboard and chalk and butcher paper saw school start in first term 1976. It was indeed a joyous occasion when the school van arrived, along with supplies, on the last day of that term! Merriel taught there for many years and still feels so proud of the achievements made by many of the students.

“It has been a pleasure to attend meetings and  conferences and work with the dedicated members of ICPA. I remain forever grateful for the inroads made for equity of education for isolated children and the wonderful friendships made through this group.”