Balranald Branch celebrated its 40th Anniversary in 2011. In early 1971, the late Mr Jack Armstrong and the late Mr John McKeon attended an ICPA meeting in Bourke and returned home and organised a meeting, which resulted in the formation of the Balranald Branch.

A committee was formed and the first executive was John McKeon President, Jack Armstrong Secretary and Mrs Faye Dowling Treasurer. Fifty families, from Balranald, Oxley and Hay attended this meeting, thus showing the great need for such an association.

Balranald Branch has always been a very active and committed group and has worked with the ICPA movement to obtain the benefits we have today. ICPA has bought together many families from all areas where they have mutual worries and concerns for their children's education and has forged many special friendships and associations.  Balranald Branch extends over a 200km radius, from Ivanhoe in our north, to Moulamein the south and across as far west as Euston/Wentworth.  Being located within a ‘border area’, in recent years our branch has welcomed a number of members who live in Victoria.

In 1999 the branch hosted the State Conference in Balranald. It was the first time many departmental and school representatives had travelled to the Far West of the State. It was a great opportunity to showcase our area, even though at the time we were in the middle of a severe drought.

Balranald Branch also hosted an extremely successful NSW State Conference in 2010. This was convened by Marg Butler and Fleur Turner with the expert help of then trusty treasurer Mary Butler.

The branch has six life memberships, these being Jack Armstrong (dec), June Armstrong, Mary McKeon (dec), Mary Butler (dec), Marg Butler and Trish Williams. The commitment and loyalty they have given ICPA at a branch level over the years has been outstanding.

Balranald branch fundraise throughout the year to be able to send delegates to both state and federal conference by catering for clearing sales and running an annual Footy Tipping Competition.

“Hatfield Happening” is now also a huge event on our calendar each year.  These days started out many years ago as ‘Women’s Health Days’.  The name change makes it more interesting, allowing us to hold many different types of workshops etc: Anything ‘happens’ at the Hatfield Happening! We hold very mixed days. One never knows fully what they’re in for. Ladies have been subjected to escapism workshops, photography, relaxation techniques, massage, handwriting analysis these are just to name a few. The most recent day - a ‘high tea’ - was joined by the Royal Flying Doctor Service South Eastern who brought along Dr Rosie King and we had over 100 women attend. It is a great day of Outback hospitality, where childcare is available from the Broken Hill Outback Mobile Resource Unit, allowing mums to have some time out for a few hours.  The highlight of our most recent Hatfield Happening was the announcement of Trish Williams as our latest, deserving recipient of Life Membership.

In 2008 Marg Butler stepped down from her long standing executive position and was given a ‘Certificate of Appreciation’ by the branch. Marg has worked tirelessly for ICPA over these years with dedication and enthusiasm.

In recent years our branch has been very fortunate to have had a number of members take up positions on State Council. Mary Butler held the position of state secretary for a number of years before having to relinquish her role due to ongoing ill health. State Council honoured Mary with a ‘State Certificate of Appreciation’ at the Walgett Conference, 2007 for her absolute dedication and continual commitment to ICPA-NSW.

Over the years Mary held many executive roles at branch level and continued to encourage our younger members to embrace ICPA as she did.  Mary died after a long battle with cancer on the 2nd July 2012 and is sadly missed by her ICPA family. Balranald Branch keeps Mary’s memory alive with our annual “Mary Butler Memorial Book Award, donated to 6 Public Schools and 3 Early Childhood/Mobile Resource Units in our membership area.

In 2007 Trish Williams took up the challenge to go on State Council at Walgett Conference. Trish held the position of Assistant Secretary and the portfolio of Rural Schools and Webmaster and retired from State Council in 2012. Trish was instrumental in bringing ICPA-NSW into the digital age with her webmaster work. Trish is well known for her role in catching all the highs and lows of ICPA-NSW on film. An amazing record of NSW State Council and conferences over the last five years has been taken on Trish’s camera and it is no wonder that Trish earned the title of Chief Photographer.

Fleur Turner elected in 2014 held the Communications Portfolio for two years and it is pleasing to see finally a long standing Balranald motion coming to fruition with the installation of a Telstra Small Cell tower near Clare Public School.

Claire Butler elected in 2015, having held ICPA-NSW portfolio of Communications and Publicity Officer during that time is now the current State President, elected in 2019. 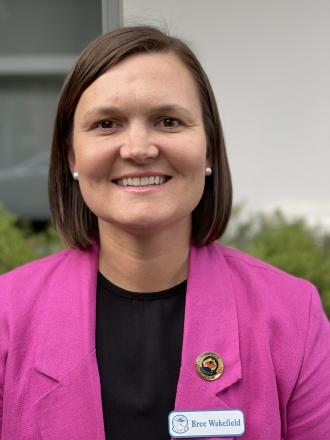