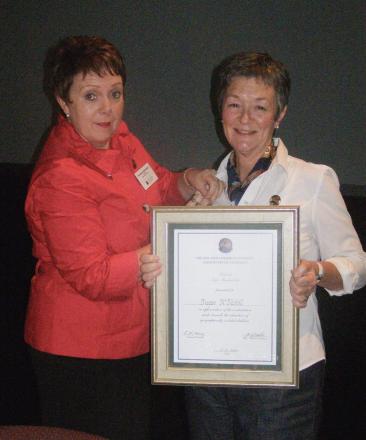 2007                    Medal of the Order of Australia for service to education as an advocate for improved services in rural and remote areas, and to the community by raising public awareness of issues affecting women.

It was with great delight those attending the 2009 Federal Conference in Longreach saw Megan McNicholl OAM awarded ICPA Federal Life Membership. Megan was nominated by her branch, Condamine/Western Downs of which she was branch President for 4 years and received Life Membership in 2001.

Megan’s commitment to ICPA over the years has included the roles of Branch President, Qld State Publicity Officer, Qld State Vice President, Qld State President, Federal Councillor and Federal Vice President. In 1999 Megan stepped up to the role of ICPA Federal President, a position she held for 4 years. During her 4 years as Federal President Megan took the organisation through immense change. She was instrumental in many changes and advances in technology for ICPA members at both State and Federal levels. The ICPA Website became a reality and email and internet became a major communication tool for councillors and members alike.

Whilst Federal President Megan also became an executive member of the Council of the National Rural Health Alliance, was appointed to the Regional Women’s Advisory Council of Australia and was elected Interim Chairman of the newly formed Rural Education Forum of Australia (REFA).

Megan received her first Australian Honour in 2001 when she was awarded a Centenary Medal for “service to rural education” followed by an OAM in the 2007 Australia Day Honours List for “service to education as an advocate for improved services in rural and remote areas, and to the community by raising public awareness of issues affecting women.”

At Branch, State and Federal levels of ICPA Megan was a tremendous role model. She was always passionate and committed and has left a legacy that should hold ICPA in good stead for the future as a well-respected lobby group for rural and isolated children’s education.