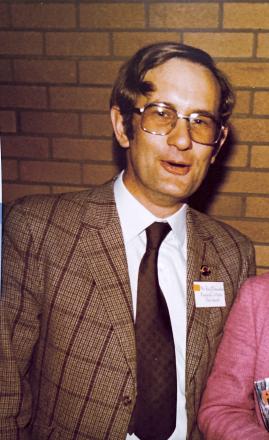 Federal Life Membership of the ICPA Australia was conferred upon Rory Treweeke on the 2nd of August 1990. Rory is synonymous with ICPA. The time and effort Rory has given to ICPA and isolated children cannot be measured.

Rory was elected President of NSW State Council at his first State conference in March 1975 which he attended as a substitute delegate.  Wally Mitchell and Bob Ridge prevailed upon him to stand at the lunch break.

In 1977 he presented a paper to the Association of Independent Schools on the necessity for isolated children to board away from home because of their geographic isolation.

In November 1979 as Federal President he presented a paper on ‘Parental Reaction to the Effectiveness of Current Government Strategies in dealing with educational isolation’ at a national week-long conference in Perth on “Rural Education: In Pursuit of Excellence” sponsored by the OECD and CERI – Centre for Entrepreneurship, Research and Innovation (WA).  He was a member of the summing up panel of three.

In 1980-1981 he was a member of the Committee of Enquiry into the Commonwealth Assistance for Isolated Children Scheme (the Tannock enquiry).

In 1981 he presented a paper to the Australian College of Education conference, “Education of the Isolated”, held in Alice Springs and Darwin in which he set out the reasons for ICPA coming into being and the necessity for the “right” of universal educational opportunity to be available to all Australian children regardless of their location.

In November 1981 he was appointed as a Board Member of AUSSAT Pty Ltd, the company created by the Commonwealth Government to establish a Domestic Communications Satellite service and continued as a member until February 1986.  During that period, he also appeared before a government appointed committee chaired by Sir Arvi Parbo to advise on the necessity or otherwise of including 30 watt transponders in the design for the direct broadcast of TV, and the inclusion of the capability for access to Small Aperture Terminals (SATs) for two way communication for education and health needs.  He made it very clear that without those two features being incorporated in the design of the first generation of satellites they would be of no use to the rural and remote residents of Australia.  ICPA at both State and Federal levels had invested enormous time and resources to encourage the Federal Government to create the satellite system as a critical part of defeating the ‘tyranny of distance’ with regards to communication needs.

During his time as Federal President he gave evidence to a Committee of Inquiry into Taxation issues as they related to people who resided in both Zones A and B in the remoter parts of the country and some of the anomalies that existed.

1981 was the Year of the Disabled and he led a group of ICPA mothers to Canberra who had children with disabilities to speak directly to those in government so they could hear of the problems firsthand.  Those mothers mightily impressed all they spoke with.

"For significant service to the rural community of New South Wales.

Mr Treweeke, who has owned Angledool Station near the NSW/Qld border for more than 40 years, has held many industry roles including serving as a former chair of the Murray-Darling Basin Community Committee, the Lower Balonne Floodplain Association, and the Western Catchment Management Authority and as a Member, Great Artesian Basin Advisory Group. He has also held roles with the NSW Farmers Association, Local Lands Services, the Walgett Rural Counselling Service Advisory Committee, the Isolated Children’s Parents’ Association, including as Federal President and NSW President, and the Rotary Club of Lightning Ridge."  Beef Central 13/6/22