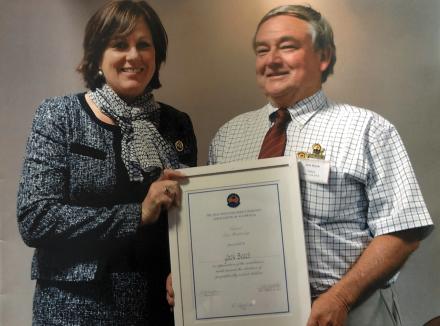 Jack grew up on Lands End station out of Julia Creek in north west Queensland. His early days of education were by correspondence and later boarding school. His commitment to what was his local area, Julia Creek and for many, many years, rural Australia in general, has been and continues to be, enormous.

While still living at Lands End, Jack’s welding and fabrication business – Beach Built Engineering, was growing at such a rate that his brother Kevin ended up concentrating on the station side of things and Jack on the blossoming engineering business. This growing business paved the way for the establishment in 2001 of the company, Vac Group. Many a Federal Councillor could tell you a little about the vac digger and its beginnings with Jack’s company!

Jack’s initial interest in ICPA was ignited at the state level. He went onto Queensland Council in October 1990, became Queensland State President in 2000 and remained in this role until 2003. His move to the Federal Council arena at the Federal Conference in Roma in 1997, saw the beginnings of 14 years of dedication to ICPA Australia.

In August 2001 in Adelaide, Jack became Federal Vice President, continuing on to become Federal President at the Hobart Conference in 2003. The next four years saw Jack in this role, guide the organisation until he moved to the Immediate Past President position at the conclusion of the 2007 Federal Conference. In 2011 the Beach era ended at conference in Darwin where Jack completed his final term on Federal Council, stepping down to make way for the new Immediate Past President. What a journey!

Jack’s time with ICPA has indeed provided him with a journey all over Australia. He has travelled to many places to attend state and federal conferences, gatherings, representation of ICPA at forums, meetings and at conferences of other organisations.

Communications was Jack’s strong portfolio interest. Progressive thinking, a desire to understand and be informed and above all, the interest of securing an equitable deal for rural people, ensured our issues were put forward in the strongest possible terms with decision makers.

Jack’s interest in communications saw him represent ICPA on the:

Jack saw the need for a website for ICPA more than 10 years ago. He instigated this initiative and followed through with its development at a time when websites were certainly not as commonplace as they are today.

Jack used every available opportunity to speak about ICPA and its work. ICPA was never about Jack. He was a wonderful team member, generous with his time, guidance and assistance to members and Councillors alike.

Jack’s commitment to advocating on behalf of rural families in Australia for equity of access to education and the many things associated with this, has been unrelenting. The organisation owes much to Jack Beach for his efforts.

In acknowledgement of an outstanding contribution to the Isolated Children’s Parents’ Association of Australia, Jack was awarded the honour of ICPA Australia Life Membership on 8 August 2012.