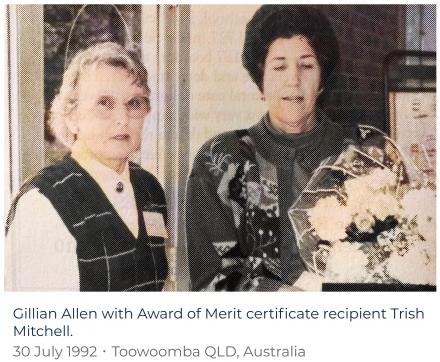 Mrs. Patricia Mitchell (known as Trish) has a long history with ICPA. In 1973, Trish called a meeting of interested people in Augathella to talk about a fairly new organisation - The Isolated Children’s Parents’ Association. From that meeting, Augathella Branch was formed, and Trish was elected the inaugural Branch President.

Trish has been an ICPA member since the formation of that branch. Trish also assisted Charleville Branch of the Air with their formation in 1976 and she was their first Branch Secretary/Treasurer. In addition, Trish is proudly a member of the Cloncurry Branch, having served previously as Cloncurry Branch President, and she became a Cloncurry Branch Life Member in 1987.

As mentioned Trish is a Cloncurry Branch Life Member and to add to that accolade, in 1992, she was the third person in the organisation to be awarded a Federal Award of Merit. She received Queensland State Life Membership in 1995 and became the Patron of Qld ICPA in 2002 and she continues in this role today.

There is a long list of committees, submissions, delegations and conferences of which Trish has been a part, but the length of this list does not adequately explain the depth of commitment she has given to ICPA and her efforts towards the betterment of education for rural and remote children. In 1996, Trish was awarded the Medal of the Order of Australia General Division (OAM) for service to rural education and The Arts.

Trish has also strongly supported both state and federal councils over the years and continued to be involved, active and supportive of ICPA and its advocacy. No matter what Trish is involved in, she is always looking for where ICPA might be mentioned, or a connection made that might further the cause.

Mrs Patricia Mitchell OAM was awarded with Federal Life Membership at the 2019 Federal Conference in Adelaide.