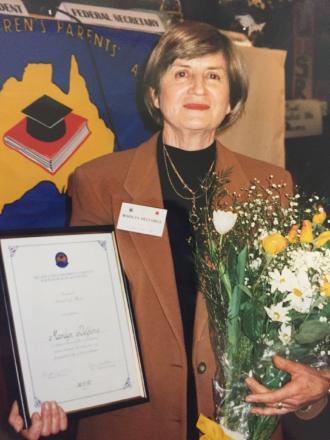 Marilyn Delforce from Arcadia Valley, Qld was presented with an Award of Merit in appreciation of her dedicated work for Federal Council, at the 1997 Federal Conference.

Marilyn's involvement with ICPA began in 1972 when the Roma Branch was formed. The Branch closed for several years and she was instrumental in reforming it in 1978 when she became Branch Secretary.  Roma Branch Secretary was a position she held until she resigned after being being elected as Federal Secretary at the 1979 Roma Federal Conference which she convened. In 1982 she had moved back to the family property in the Arcadia Valley.