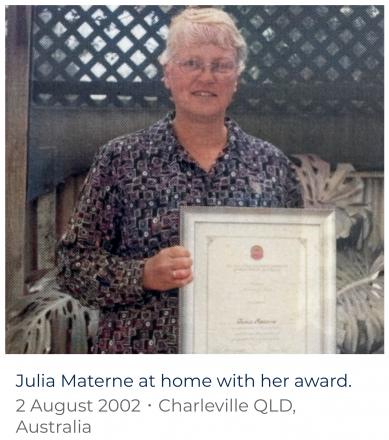 ICPA Federal Life Membership was presented to Mrs Julia Materne at the 2003 Federal Conference in Hobart in recognition of her many years of voluntary contribution to ICPA.

Julia's involvement with ICPA began when she joined the Port Augusta Branch, South Australia in 1977. She was the inaugural President of the North West Branch in 1983, and a year after being elected to the South Australia State Council in 1984 she became State Secretary. Julia's considerable ability has always been appreciated - one year after being elected to Federal Council in 1986, Julia became the Federal Assistant Secretary whilst still holding the position of State Secretary. She maintained these two positions for two years, and then became Federal Secretary in 1989. Julia remained as Federal Secretary for four years and was meanwhile honoured by South Australia when she was awarded Life Membership.

After finishing her four-year term as Federal Secretary, Julia was elected in 1993 as Federal Vice President - a position that she held for another four years. In 1997, Julia considered retirement but was persuaded to remain. Having been a committee member for a year, in 1998 Julia was again elected to the position of Vice-President. In 1995, Julia became the Federal Council Archivist, and hopes to be able to continue in this job.

All would agree that Julia has made a wonderful contribution to ICPA. Members of Federal Council will sorely miss Julia's input - her calm manner and well-considered opinions are highly valued by us all.