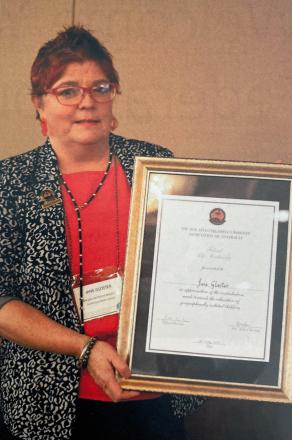 When focusing on an organisation's future it essential to recognise the very special people who not only dedicate their time to the organisation but go well beyond what members consider the norm, to maintain the image as a progressive, professional and well presided Association.

While Jane's longevity is to be taken into consideration for the nomination of Federal Life Membership it is her commitment to council, the high standards she set and her willingness to support and guide fellow councillors over this time, that should be acknowledged.

In Jane's role as Secretary, she undertook to update and reformat many council documents. Jane is known for her proofing abilities and set a high standard for all documents written in the name of ICPA Aust.

Jane's willingness to support and mentor other councillors was valued by all who worked with her. This often meant, at times, taking on a huge workload, nevertheless that didn't impact on the importance she placed on getting work done on time. Her knowledge and interest in all ICPA issues meant she was able to write, speak or suggest the best plan of action in all portfolios matters.

Her knowledge and love for politics was shared with all and she was therefore often well placed to act on or react to issues as they came up. While the historical aspect of ICPA was extremely important to Jane, she also recognised the need for change to ensure the organisation remained relevant and valued by members.