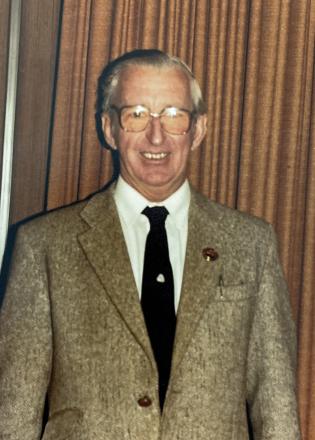 Life membership will be conferred on Bob Ridge during the Federal Conference. Bob will be only the third person to receive this recognition at Federal level. (Wally Mitchell and Pat Edgley are the other two). In the very first minutes recorded by ICPA in Bourke nearly 10 years ago Bob's name is written in the opening sentence. "Bob Ridge asked the Shire President to welcome those present to the meeting." Bob was born in Bourke and lived all his life at Tuncoona (40 miles out) except for the period of his schooling at Dubbo High School and later at Sydney University, where he graduated as a Bachelor of Agricultural Science. Bob and Diana have four children who were all taught primary correspondence and went to boarding school when they reached secondary. Bob was co-opted by Pat and Wally to go with them to Canberra as the " brains" of the party in the first ICPA delegation car. None of them had ever been to Canberra before and were doubtful if the old car was even going to make the trip. When Bob's kids were little, they used to bring out a photo of Bob in his cap and gown and say, "This is a photo of Daddy when he used to be clever!"

Besides his involvement in those very early meetings and delegation Bob was Vice-Chairman of the NSW council for five years, Federal Treasurer for 4 years and Chairman of Bourke Branch. He also attended many formation meetings of other branches in NSW and Cunnamulla in Qld. Although his children have finished their education Bob still takes an interest in Bourke Branch happenings and is the ICPA representative on the hostel board. At the NSW state conference in Walgett in March, Bob was appointed one of the three trustees of the NSW Council of ICPA -Congratulations Bob and many thanks for what you have done for isolated children in Australia.